Well, well, well, look what we have here! Niagara Conservation. The most recent trend circulating through most bathroom ware companies (See other toilet brands here) is definitely the environmental-friendly craze. And I think it’s safe to say Niagara takes water saving to a whole new level. However, the only question is, can Niagara beat TOTO in terms of achieving the spotless white throne?

Can any toilet company beats the king on the hill, TOTO? Can Niagara be the Mike Tyson in toilet world? Well, it seems that the Niagara Stealth series are the most water-conservative toilets that I’ve ever seen. It seems that Niagara may be worth giving a shot after all!

From the outside, Niagara Stealth looks like any other toilet, nothing special. Perhaps except for the double trapway that makes siphon works better. Well, as it turn out, you can’t judge a toilet by its white finish.

This water closet uses only 0.8 gallon of water when flushing. Considering most of the commodes on the market use 1.0 GPF or higher, this is a buried treasure.

The secret behind this toilet is that it is not a gravity toilet. Instead, it is pressure-assist, which means it can use less water to achieve the same result. One of the huge downsides of pressure assist toilets though, is that it makes a loud jet engine sound when triggering the valve. However, Niagara invented the noise cancelling tank to eliminate the problem. Well, the toilet is called “Stealth” after all!

The model’s dimensions are 28.9 x 18.8 x 31 inches and weighs 103 pounds, pretty standard stuff. The only drawback is when buying from Amazon, it doesn’t come with a seat and wax ring...but if you get it elsewhere, it should be fine. Finally, it’s important to note that this toilet is labeled as WaterSense.

Apparently, Niagara is very proud of their water-saving abilities. In fact, the whole brand is built around the concept. In the 1970s, Bill Cutler, the founder, invented a shower head, because he thought saving water was a cool thing to do. Soon after, the conservative shower head became a hit in the era, which lead to the birth of Niagara.

But Bill didn’t stop there. There was a fire inside of him that kept pushing him forward. In 2000, Niagara came up with a super efficient toilet that was never seen before. A toilet that used only 0.8 gallons when flushing. Sure enough, this breathtaking lavatory earned the one and only UHET (Ultra High Efficiency Toilet) label.

Niagara is not only an exciting company, but a burning star. I can almost predict that in the future Niagara will shine brighter than TOTO if the company keeps producing great products. Anyway, you should not miss this model if saving money on water bill is your goal. 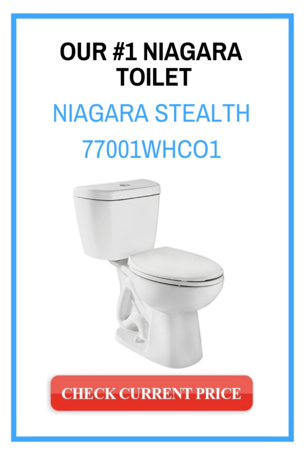